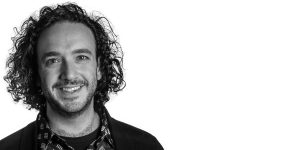 David Amar is an immigration and entertainment attorney at CoveyLaw. On the immigration side, David focuses his practice on preparing O and P visa petitions for performing and recording artists. His entertainment law practice extends to all types of transactional matters facing artists and creatives.

As a Canadian citizen, he has first-hand experience negotiating the U.S. immigration process. David has worked in various facets of entertainment, IP and employment law, where he has advised entities ranging from music publishing corporations, to independent musicians, to a major media corporation, to an early-stage tech startup. He has provided pro bono services to his local food cooperative, and with Volunteer Lawyers for the Arts.

David is also a multi-instrumentalist (primarily a trumpet player) who has performed in various ensembles in Vancouver, Toronto, and New York, and was a professional chef before moving to Brooklyn.

David holds a B.A. from Victoria College at the University of Toronto and a J.D. from Brooklyn Law School, where he was published in the Brooklyn Journal of International Law. He is admitted to the New York State Bar and is a member of the American Immigration Lawyers Association.