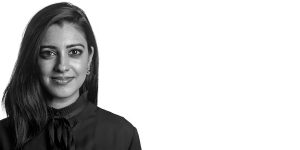 Tafiya Khan is an immigration and entertainment lawyer. Her practice is focused primarily on employment-based visas for the international artist community, and on contract issues related to the performing arts. Since joining CoveyLaw in 2015, Tafiya has helped thousands of performing artists with visa petitions and consular processing.

Tafiya is a volunteer attorney for her CoveyLaw’s affiliated nonprofit, Tamizdat, Incorporated. Through her commitment to international cultural exchange and  artist mobility advocacy, Tafiya has given presentations on the U.S. visa process at New York Law School in New York, Here Arts Center in New York, MU:CON in Seoul and TIMM in Tokyo. She also advises on live streaming issues through Tamizdat’s AVAIL program.

Tafiya is an active member of the American Immigration Lawyers Association, (AILA) having spoken on panels and served on a number of committees for the New York chapter including New Member Division, Continuing Legal Education and Corporate Practice. Recently, as Co-Chair of the Advocacy Committee, she worked to bring key issues in immigration reform to the attention of Congress and led the New York chapter at the AILA National Day of Action in Washington D.C. in April 2019. She also served as Co-Chair of the AILA New York Symposium in December 2019.

Tafiya is also a member of the New York State Bar Association of which she is part of the Entertainment, Arts and Sports Law section.

Tafiya works on pro bono cases within CoveyLaw, including ones with clients subject to the recent “travel ban” set out by the 2017 Presidential Proclamation. She is also a volunteer attorney for the Center for Art Law Immigration Clinic advising visual artists on immigration. Tafiya has previously worked on pro bono cases with Kids in Need of Defense and Safe Passage Project, which are organizations that aim to provide legal representation for unaccompanied immigrant and refugee children in their removal proceedings.

Tafiya holds a J.D. from New York Law School, an M.P.A. from City University of New York, Baruch College and a B.A. from Fordham University and is admitted to the New York State Bar.